The indoor glider events are simple yet hard to master. When one thinks about the events, it quickly boils down to three requirements. These are:

Weight and Aerodynamics (airfoil) are the two important factors in determining the sink rate. The lighter the glider, the better the sink rate. It is very simple. Also an airfoil with a larger lift coefficient translates into a better sink rate. Weight is the most important of these two factors. One must remember this and build the glider as light as possible......but Strength is the most important factor for getting the glider high. One must never forget that the easiest way to turn good times is to get higher. At most contests the person who gets the highest typically gets the best times. So one must build the glider strong enough to get to the top of the building. The easiest way to get strength is to build the glider heavier. The higher density balsa woods typically are stiffer and stronger. Also if one makes the wing thicker, strength is gained. Glider height is also influenced by aerodynamics and weight. One needs a low drag airfoil because drag is the second most important factor in obtaining good height. It also turns out the heavier the glider the higher it will go. But the weight of the glider does not strongly influence the height. Also don't forget weight is very bad for sink rate. One can easily see that the factors which influence one important requirement, also will influence one of the other important requirements in the opposite direction. That is what makes gliders so challenging. Now let's not forget about transition. Transition is influenced mainly by aerodynamics. This time aerodynamics doesn't mean airfoils but other things like dihedral in the wing, nose and tail lengths or moments, rudder and elevator sizes and positions. A good design has usually worked out all these issues. The designer has typically arrived at a design by the built it, fly it and then build another one with some small improvements. Some things important to note. First, how strong you are really doesn't give you a great big advantage, especially in catapult gliders. Yes it is easy to put more rubber on your launcher and pull back harder, and the glider might go up a little higher, but you will be surprised how much more force it takes to get just a little higher. Even in hand launch gliders, I am sure I could get my glider higher then the best major league pitcher, if he his glider was a flexible, high drag and light plane. Second, don't worry about getting the lightest wood available on this planet. I have some 3.5 lb/ft^3 balsa which is useless for gliders because it has no strength. It is really a strength vs. weight ratio that you are interested in. So if you can't find the lightest wood, don't worry about it. Try you best to get good wood, but heavy wood used appropriately has and can work. Yes maybe the wing thickness needs to be thinner, but remember thinner wings equal less drag.

Unfortunately- Not every plane is successful! 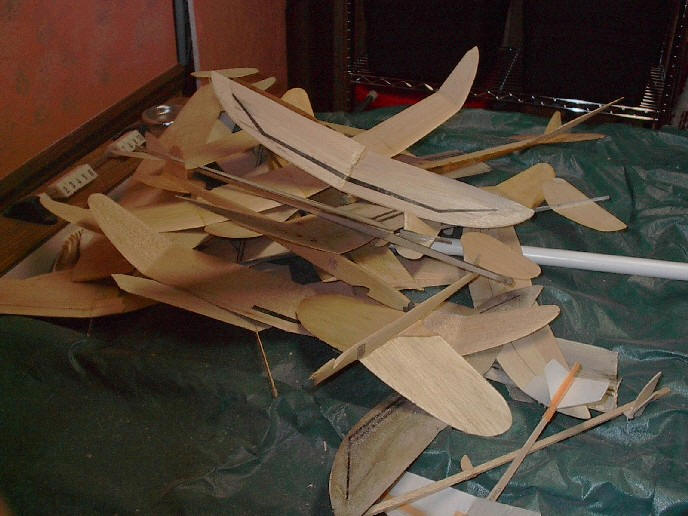